On Friday 20th April, a team of creative individuals came together at The One Studio, Manchester, to shoot the first collection of Fashion Frenzies, SansAwWi2018. As we arrived at the studio, the garments were carefully hung up on the rails ready to be worn by model Mabz Beet to showcase the Eastern and Western fusion. The collection draws inspiration from Indian ethnic wear as well as urban sportswear and more formal outerwear. The surface print and embellishments feature bold colours and incorporate Indian mythology and Gods, considering every small detail to ensure a balanced collection.

As this was the first shoot carried out by the brand, we all learnt a lot through the process, but it was fair to say that it was a success! The first thing we realised when tried to find our way to studio that we should have visited studio a day before the shoot, as we found it a bit difficult to find our way around. It also caused 15 minutes of delay for the shoot to begin.

We started by setting up the studio as the model was preparing, ready for the images to be taken. The two photographers, Aarya and Yam, were in-charge of the set up and used their already existing knowledge to ensure everything was in place. We started off with a white backdrop so that the colours of the garments would pop and stand out. As the model was now ready it was time to shoot the first outfit. Experimentation with the positioning of a red scarf created a series of different looks, showcasing the details and level of quality of the accessory.

When reviewing the images afterwards it was found that using more accessories may have been more beneficial. This would have enabled even more experimentation and individuality to the looks. After a series of different shots from close ups to poses on a stool, and with various outfit changes, it was now time to change the backdrop!

To add a vibrant pop of colour against the garments, the next backdrop used was pink. This complemented the blue toned clothing excellently and provided a source of rich colour. As we were now getting into the swing of things, the poses started flowing more naturally and we were able to experiment with more movement to showcase the structures and lines of the clothing. After even more outfit changes, it was fair to say that we built up a great number of images that represented the collection and reflected the Eastern and Western fusion well.

Although the studio was booked for four hours, time flew by quickly we didn’t even have the time to take a break and a quick lunch. Thanks to owner of THE STUDIO ONE who provided refreshments. Anyone doing photo shoot, we would strongly recommend you carry some food with you. Overall the shoot was a great success! 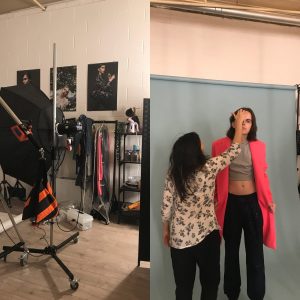 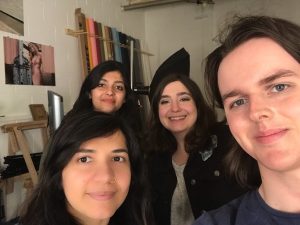